skip to main | skip to sidebar

How to proceed :
you can either click on the above "Donate" button which takes you to the Paypal Donation page. It shows $19.82 as donation amount (shipping & handling costs)

or you go to your Paypal account and you transfer $19.82 by using my Paypal ID : hattia@gmail.com

Don't hesitate to contact me at hattia@gmail.com for more informations. 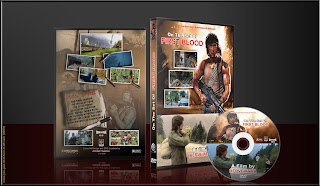 PHOTOS HERE
Posted by Hervé Attia at 8:39 PM No comments:

Rambo Stallone - On The Set Of First Blood : Part3

When I went visiting 'First Blood' Rambo filming locations in May 2008, I spotted what could have been the 'Delmore Berry's property'.

In fact, the landscape, hills and mountains (Golden Ears peak and Mount Baker)in background were the correct ones. The Delmore Berry' home was somewhere there. I thought it was either a private property or the nearby blasting area (shown in this video "Rambo Stallone - On the Set of First blood : the final chapter ). I left the site skeptical.

and read my blog story above, was curious and decided to continue my research. With the help of his dad, he started looking from the point I left. And the unimaginable happened. The 'Delmore Berry' 's property was finally discovered!.

Right the way, Scott contacted me and without any hesitation I decided to come back (November 2008) and shoot the location.

The photo below shows the Delmore Tree 27 years after. The tree is still standing but rotting.

A view from the shore. 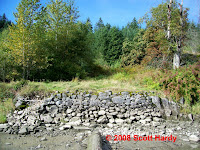 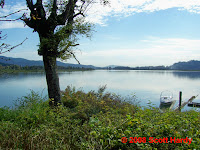 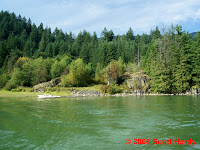 The property is now very desolate with lots of over growth about mid way through, about 27 years worth. Below is the field when Rambo is walking down the hills after giving us a the only smile in the movie :) 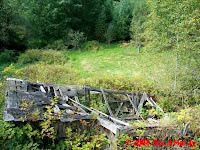 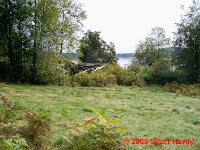 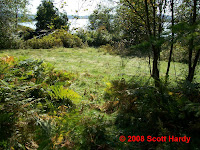 The cabin on the left as Sylvester Stallone is walking down the road has been demolished but quite a bit of junk has been left behind. The photo in the middle was taken end September. You can see the demolished cabin on the left. I"m standing at the same spot one month after (November 8th). The place was more opened up. 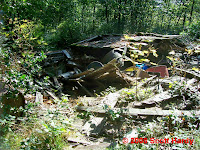 The widow cabins and huts you see in the First Blood opening scene sequence are still there, some are still standing.

The tree of which the widow had her clothes line attached is still there, but rotting. The famous Golden Ears peak behind Rambo when he gives the photo to the Delmore widow. 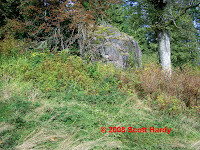 The place has been shutdown long time ago by the government, probably in the 80's.

The true story is that all the cabins were not part of a set. they belonged to the people who were living on the site. Actually, these cabins are either demolished or burnt down. We don't really know what happened. We are assuming these people was leasing the land. The natives did not renewed the lease. Then these people were forced to leave. But they did not want to give away their homes. So, they demolished them or burnt down.

The area looks so peaceful and quiet. Today it seems that this is place is just forgotten and left behind, but for the true First Blood lovers that's exactly what we want to see.

The Military staging area was discovered by Scott Hardy. The place is located here
On the East of Golden Ears park.

Scott used to do camping in this area. And one day, he realized the site looked familiar. Like 'deja vu' :) 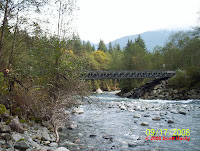 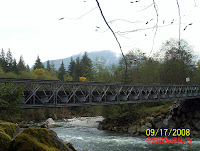 ‘On the Set of First Blood’ movies

Posted by Hervé Attia at 5:47 PM No comments:

The Walls of Hope

Posted by Hervé Attia at 5:47 PM No comments: